Use your smartphone to text RVSTARS to 41444 now to vote for Holly & Collin!

When she’s not swimming with the stingrays in Bora Bora, sleeping among the lions in Tanzania, two-stepping in Austin or celebrating New Year’s Eve in the Big Apple, you’ll find this vivacious North Medford High School and University of Colorado grad working her magic at Rogue Disposal & Recycling as a jill-of-all-trades and the CEO’s right-hand woman. These days, however, Holly calls the Mile High City home. She still works for Rogue (thanks to video conferencing, email, cell phone, and Slack) and still travels to Medford frequently, but she’s set up roots in Denver to enjoy all the big city has to offer.

Holly is a true philanthropist at heart. In Medford, she volunteered for The Craterian Theater, Southern Oregon Sparrow Clubs, Junior League of Jackson County, Community Works, Children’s Ministry at Grace Point Fellowship, and the Special Olympics of Oregon. Her tireless volunteer efforts earned her the 2019 Jolie Johnson Leadership Award presented by the Women’s Leadership Conference of Southern Oregon.

Now in Denver, she works with the Rocky Mountain Alliance (RMA) Children’s Foundation, a local nonprofit dedicated to improving the lives and well-being of local children. The RMA is run by up-and-coming female philanthropists who work together to make a positive difference in their community. Holly also continues her connections with southern Oregon through ongoing involvement with the Storytelling Guild.

An avid snowboarder, Holly spends lots of time in the mountains with her family and friends – including her four-legged fur baby, Gracie, a lovable Labradoodle, who is currently expecting her second litter of puppies. She is forever jazzed to be connected with Dancing with the Rogue Valley Stars, where she competed twice — winning the coveted mirror ball trophy in 2019 and helping to raise a record-breaking $40,000 for the Southern Oregon Sparrow Clubs.

Collin, twenty-six, is extremely blessed and excited to participate again in Dancing with the Rogue Valley Stars 2020: A Look Back! He is the second oldest of nine children, five boys, and four girls, and attends Christ Covenant Church in Rogue River. He was born up in Evans, a small community along the Columbia River in northwestern Washington. His family moved down to the Rogue Valley when he was about two years old and has lived here since. Collin and all of his siblings were/are homeschooled.

Collin first got involved in ballroom dancing in 2012 when some of his friends asked him to fill in for a guy for a performance they were doing. It took a little persuasion, but eventually, he joined and hasn’t regretted it since then!

When Collin is not dancing, he is either playing volleyball or performing with any musical theater group that will have him. Productions include TMTO’s (Teen Musical Theater of Oregon) Joseph and the Amazing Technicolor Dreamcoat, Summer 2018. Collin’s participation in DWTRVS 2018 marked his first time teaching choreography and the experience was a blast! 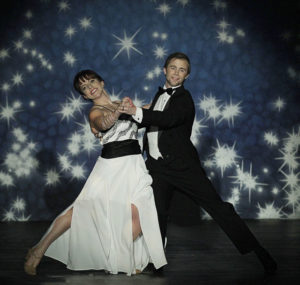 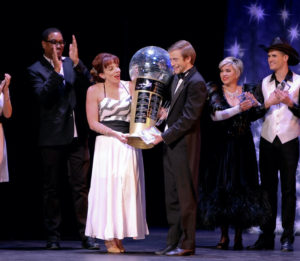